While it may not be the most glamorous subject matter, vine-training is an essential topic to understand for students of wine. The method in which a vigneron replants and manages the growth of vines has big implications on matters concerning yields, protection against weather, and the overall quality of the final wine. Furthermore, because of its effect on labor and resource deployment, vine-training can determine whether a winemaker’s operation is financially viable in the first place.

“There are two basic systems to pruning vines: cane pruning and spur pruning,” says Stephen Skelton, MW, who has written extensively on pruning systems around the world, including in his book Viticulture. “Almost all training and pruning systems conform to one of these, although some systems are hybrids of the two.”

While the choice in pruning system depends greatly on the natural elements of the vineyard, Skelton notes that vine-training has cultural ramifications as well. “It is not unusual, especially in the New World, to see different training and pruning systems side by side,” he observes. “In the Old World — especially in better quality appellations — such things as row width, inter-vine distance, vine density and pruning system are often part of the regulations.”

In the first part of a new, on-going series we are calling Vine School, we will take a look at the five most common vine-training systems found in France, Italy and Spain, and offer some insights on their advantages, disadvantages and why growers would choose them.

Also known as “cane replacement” pruning, this family of vine-training systems is predicated on the removal of the previous year’s fruiting wood, which the plant then replaces with fresh growth in the spring. These systems tend to be preferred for growers looking toward high-density plantings, whereby the vines compete for water and nutrients — a process that keeps vigour under control.

Across France, Italy and Spain, two of the more common variations within the family of cane-pruning systems are Single Guyot and Double Guyot. Let’s look at their differences. 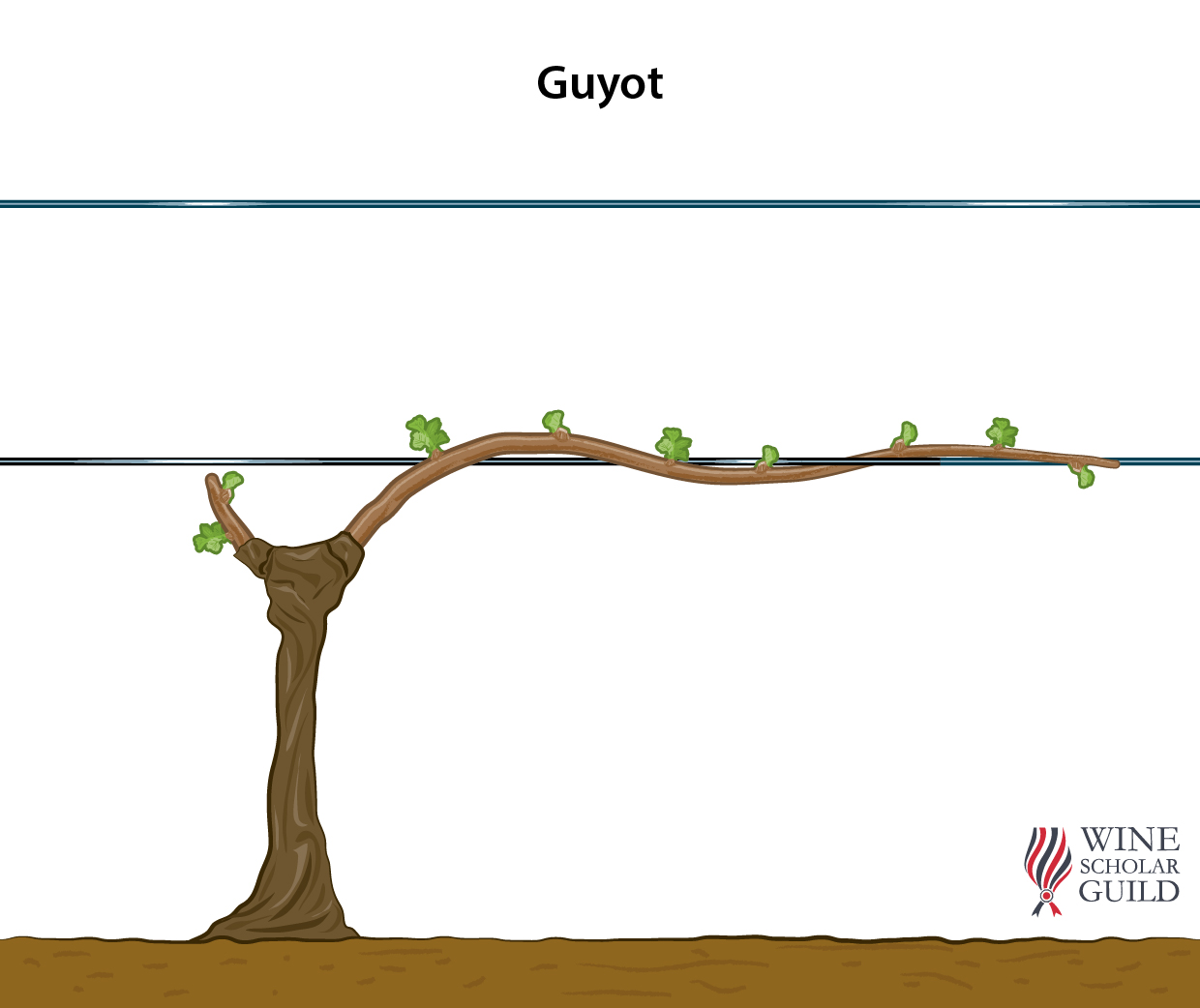 Single Guyot is one of the most common methods for training vines, particularly in cool climates where late-season frost can be a threat. This cane-pruning system consists of a trunk and a single fruiting cane with one renewal spur. The cane is draped over a horizontal support wire from which it can expand and bear buds, often numbering from six to 10. The renewal spur often sprouts two buds that will develop into the next year’s fruiting cane. Additional wire is used to support the canopy.

Single Guyot is preferable for low- to moderate-vigor vines, and is considered to be a simple system to maintain. There is also generally a smaller crop with single Guyot, which makes it ideal for winemakers seeking lower yields of a higher quality. 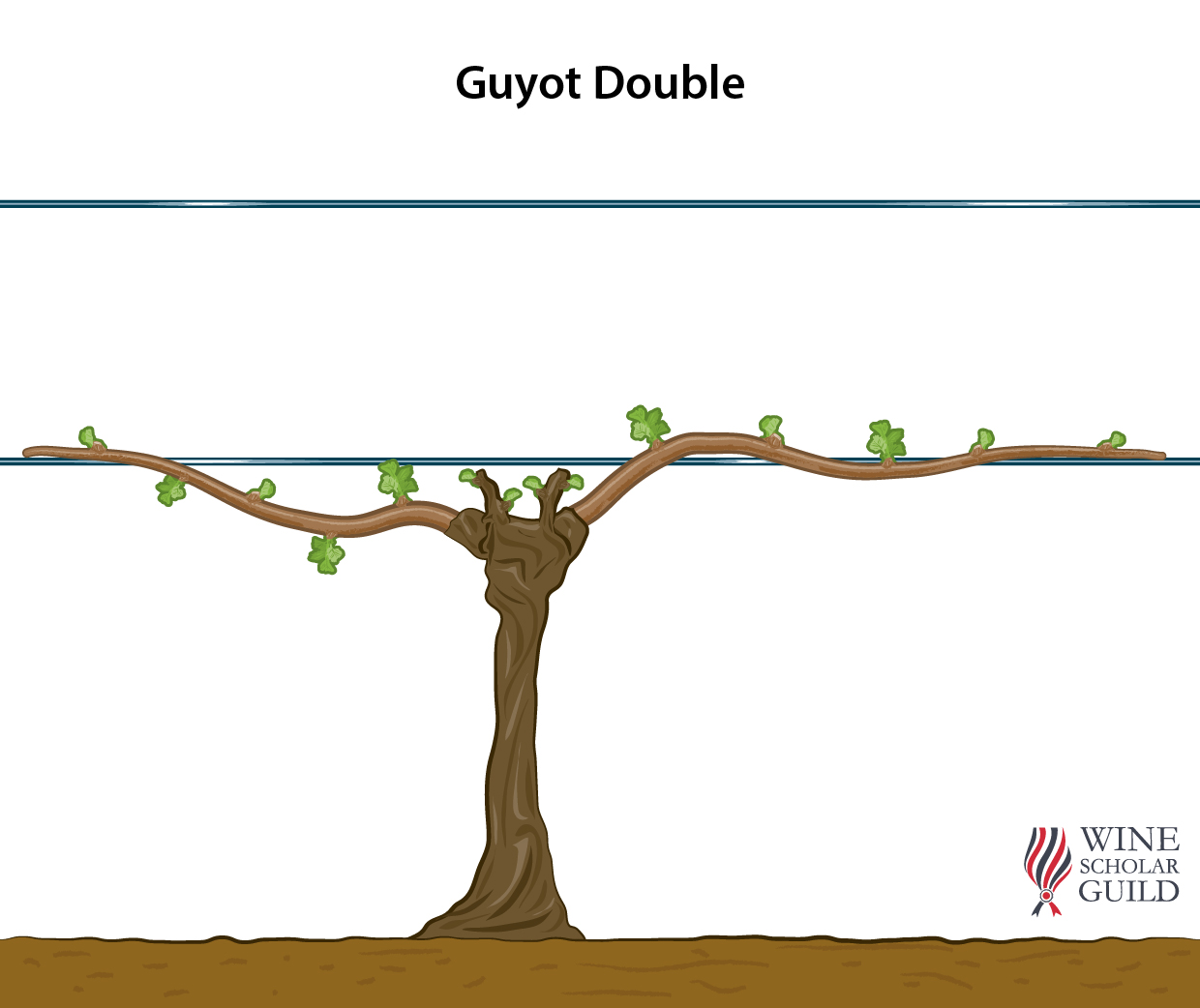 Just as the name suggests, this cane-pruning system is basically the single-Guyot method only doubled: two fruiting canes are used — stretched in opposing directions to form a “T” — with one or two renewal spurs for the next year’s growth. Additional wires above are used to support the canopy.

Double Guyot carries a few advantages for growers, with the main benefit being financial. Since double Guyot requires less vines per hectare than single Guyot does, the vigneron can purchase fewer plants when replanting a vineyard.

Now we come to the spur-pruning (also known as cordon-trained) vines, in which the trunk of the vine is allowed to extend horizontally along a wire, yielding shoots over many years.

Common in warm-climate growing regions, spur-pruned vines are easier to prune than many cane-pruning systems, especially Guyot, due to the height of the vines. This allows the vines to be pruned mechanically. Furthermore, spur-pruned vines are better suited for drought-prone regions due to their lower vine density, which allows the plants to have lower competition for water and nutrients. 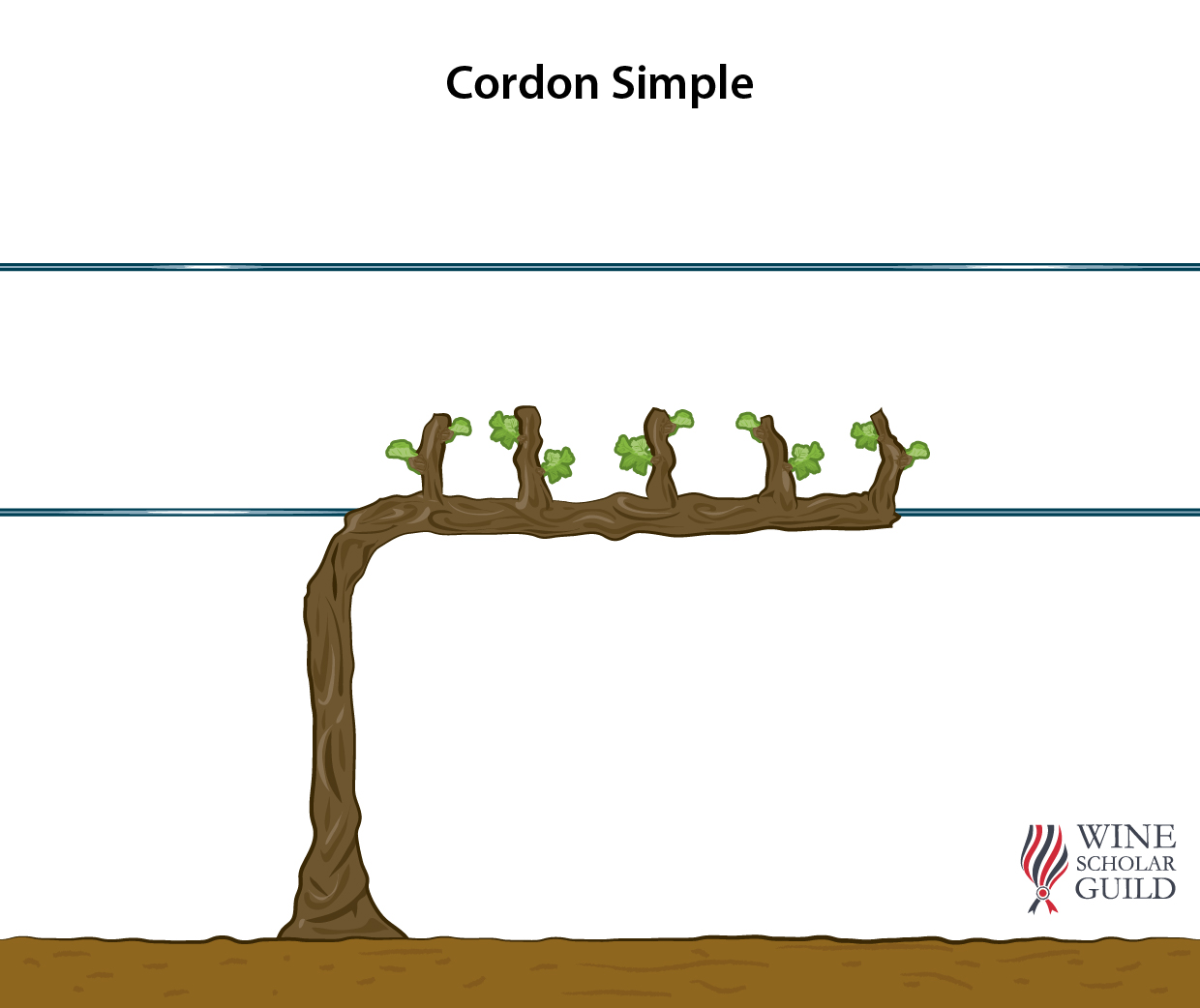 In this system, the trunk is trained horizontally from which four to eight spurs sprout vertically from it. Each spur then bears two to four buds per season.

Since no canes are tied down, pruning is simplified and can be done mechanically. In comparison to cane-pruned systems, the single cordon also requires fewer posts to hold up the trellising. 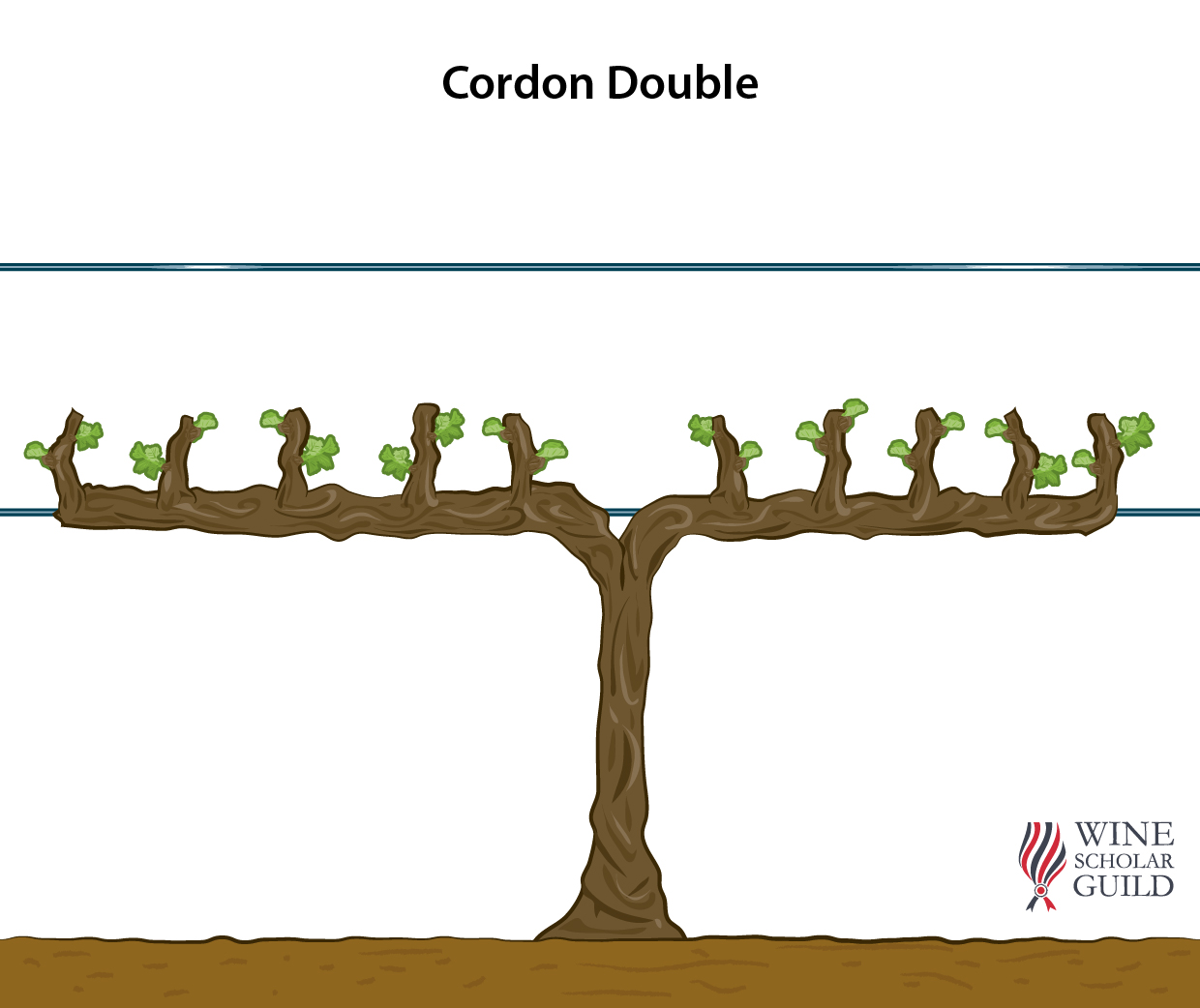 Similar to the single-spur cordone, double-cordon spur-trained vines rely on a permanent trunk. However it is trained to go in two separate directions, with up to five spurs rising up from the cordon. With more spacing required from one vine to the next, the double-cordon spur-trained system allows for very low vine density, which can be advantageous in drought-prone regions, or in saving costs at planting, since fewer plants are needed. 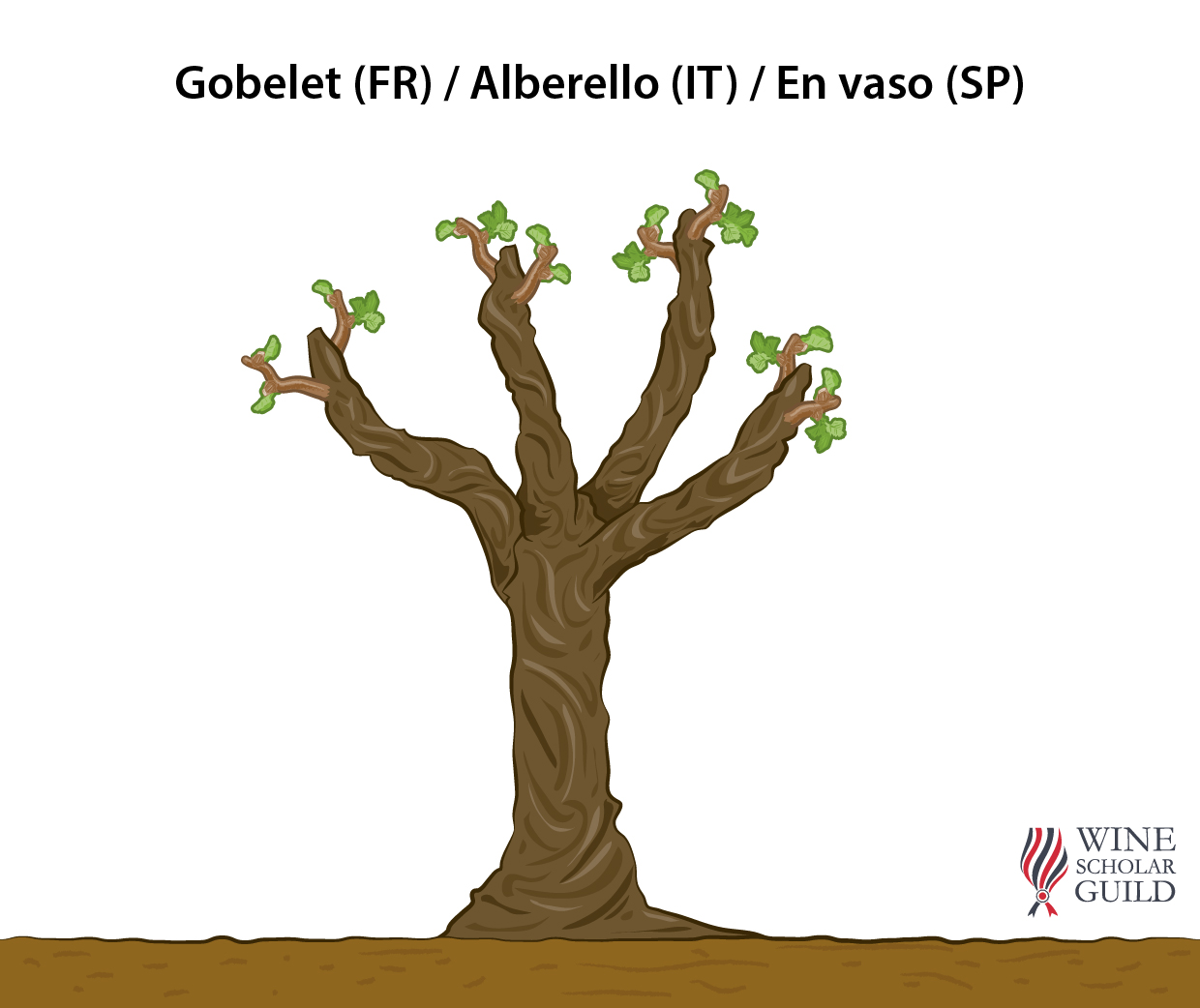 The free-standing bush vine does not require wires or other support systems. A short trunk is allowed to grow and from it, three to five branches — each sporting one to two spurs — which bear the vine’s buds.

Bush-trained vines are often seen in areas of extreme warmth and dryness — or in some cases, extreme cold. That’s because the system helps conserve moisture within the plant. It also affords some protection against the elements, particularly wind (by being low to the ground) and sun (by creating shade over the clusters). In cold, high-elevation climates, bush-trained vines can aid in the ripening process by keeping the clusters low to the stony ground, where radiant heat can influence their maturation.

A special “thank you” is in order to Stephen Skelton MW for his contribution and insights to this report. To learn more from him about vine training and other viticultural practices, visit his website, EnglishWine.com.

Learn how vine training — as well as history, culture, terroir and the international wine marketplace — influence the unique wine regions and wines of France, Italy and Spain with the Wine Scholar Guild’s comprehensive Study Programs. Or, see the vines up close and learn about them from some of the world’s top experts with our Wine Immersion Study Tours.